Me!  I went to the Magic Kingdom at Walt Disney World® on Friday, 4 December 2009, to watch the pre-taping of the 26th Annual Disney Parks Christmas Day Parade that will air on Christmas Day (25 December 2009) on the ABC Network at 10:00 am EST.

Allow me to reverse for a moment.  I arrived at the Magic Kingdom® by 7:00 am on 4 December, it was cold, the rain was pouring down, and the production crew was scrambling to deal with protecting the expensive rigging, booms, mics, cameras, and even the talent.  As part of the select crowd to view and participate in the event, we were shuffled off to a location in Tomorrowland® to listen to 27-year veteran Disney employee, Billy Flanagan, who told us that, due to the inclimate weather, the taping of the Jonas Brothers would be cancelled until Sunday, 6 December.  The disappointment abounded amongst the crowd of people that had been awake since 4:00 am to be extras in the videotaping of the parade performances.

But in true Disney form, they did not disappoint!  The entire staff and production crew scrambled for a solution to the inclimate weather.  How could a rainy cold front stop Disney from fulfilling the fun expected by their guests? 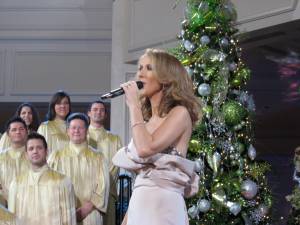 While we, the crowd, stationed over in Tomorrowland wondered what solution Disney would implement, we were all quickly notified by the Disney emcee, Billy (mentioned above) that we would get to see Céline Dion perform at the Grand Floridian Resort and Spa on Disney property.  Can you believe it?  My music idol, Céline Dion, performing at the Grand Floridian with me in the audience?  The redemption that Disney presented to us also included not only the performances by Céline but also a free pass to come back to the park on Sunday, 6 December, to be extras during the taping of the Jonas Brothers!  I cannot put into words how thrilled and excited I was with Disney’s professionalism and care for us, the guests.

But what did this decision mean for the staff and production crew?  They had to scramble to move all of their cameras, rigging, and crew from in front of Cinderella’s Castle to the Grand Floridian, in the cold and rain, break out all of the Christmas decorations from storage, and set up the lobby of the Grand Floridian in record time, 3 hours!  God bless the staff and crew for their extraordinary flexibility.

When we arrived at the Grand Floridian, the lobby was exquisitely decorated in all Christmas attire, a gorgeous mirrored stage, and an extremely talented backup choir in golden robes.  Céline performed two songs, the crowd went wild, and the taping went flawlessly.  The production crew performed several crowd passes, so I hope to have been captured on film during the production.  At the end of the 16-hour day, the wait was all worth it.  I was less than 15 feet from Céline!

On Sunday, 6 December, we returned for the taping of the Jonas Brothers in front of Cinderella’s Castle.  We were all handed colored handkerchiefs and grouped by color (I had yellow).  As extras, we had to learn the dance choreography, and we put on an awesome show that day.

Please watch the 26th Annual Disney Parks Christmas Day Parade this year, and watch for me on television!  My biggest take-away from this past weekend was the efforts and collaboration amongst the thousands of people that were needed to make this such a successful event.  Thank you all.  Your efforts did not go unnoticed!

Happy Holidays to all ~

2 thoughts on “What do Disney, a Cold Rainy Day, and Redemption Have in Common?”

I am a professor of Marketing at Full Sail University in the Digital Marketing degree. I teach a wide range of classes in mobile and emerging technology marketing, storytelling, content marketing strategy, new media distribution channels, and personal branding. I also currently serve as a LinkedIn Advisor and as a Past-President of the American Marketing Association of Orlando. My interests are in music, film, television, and art.

Error: Twitter did not respond. Please wait a few minutes and refresh this page.